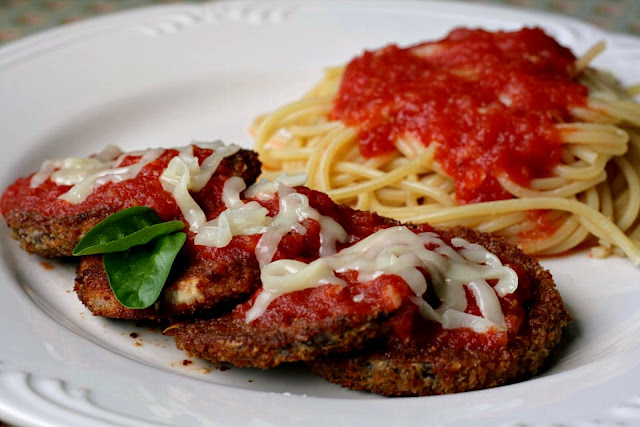 This year we decided to plant a garden.  We managed to fill the tiny plot with quite a few plants. With a lot of blood, sweat and tears, it has been pretty productive.  I didn't realize gardening was such hard work.  It requires a lot of attention but I found I really enjoyed taking care of something that didn't talk... or bark... or meow back. 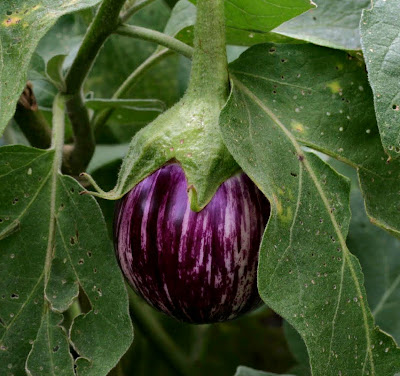 This little globe is actually an eggplant variety called Purple Flame.  I haven't really eaten much eggplant, let alone cooked with it but it was pretty and we thought we liked it, so we put in the garden. As it turns out we do enjoy eggplant, and this recipe was a real winner.  I especially liked it because there was no actual frying involved.  Everything is baked in the oven which means it's healthier and less messy!  This is kind of a labor intensive meal for a busy week night (which of course is when I decided to try it out) so I skipped baking it in a casserole and just plated the eggplant then topped it with sauce and cheese.  Either way you can't go wrong with this dish.

Directions:
To prepare the eggplant, toss the eggplant slices with the kosher salt in a large bowl until combined.  Transfer the salted eggplant to a colander and set the colander over the now empty bowl.  Let stand until the eggplant releases at least 1 tablespoon liquid, 30-45 minutes.  Spread the eggplant slices on a triple thickness of paper towels; cover with another triple thickness of paper towels.  Press firmly on each slice to remove as much liquid as possible.  Wipe off any excess salt.
While the eggplant is draining, place a rimmed baking sheet in the oven and preheat to 425˚ F.  Pulse the bread in a food processor to fine crumbs (about 15 1-second pulses).  You should have about 3 cups. (Skip this step if opting to use bread crumbs.) Transfer the crumbs to a pie plate and mix in the cheese, salt, and ¼ teaspoon pepper; set aside.  Wipe out the bowl of the food processor.
Combine the flour and ¾ teaspoon pepper in a large zipper lock plastic bag; shake to combine.  Beat the eggs in a second pie plate.  Place about half of the eggplant slices in the bag with the flour; seal and shake to coat.  Remove the slices, shaking off the excess flour.  Dip in the eggs, letting the excess run off.  Coat evenly with the bread crumb mixture.  Set the breaded slices on a wire rack.  Repeat with the remaining eggplant until all the slices are breaded.
Remove the preheated baking sheet from the oven.  Add the vegetable oil to the sheet and tilt to coat evenly.  Place the breaded eggplant slices on the baking sheet in a single layer.  Bake until the eggplant is well browned and crisp, 25- 30 minutes, rotating the baking sheet after 10 minutes and flipping the slices after 20 minutes.  Do not turn off the oven after the slices are baked.

While the eggplant is baking, prepare the tomato sauce.  Process about half of the diced tomatoes in the food processor until almost smooth, about 5 seconds.  Heat the olive oil, garlic and red pepper flakes in a medium saucepan over medium-high heat, stirring occasionally, until fragrant and the garlic is light golden, about 3 minutes.  Stir in the processed tomatoes and the remaining diced tomatoes.  Bring to a boil, then reduce the heat to medium-low and simmer, stirring occasionally, until slightly thickened at reduced, about 15 minutes.  Stir in the basil and season with salt and pepper to taste.

(This is the step I skipped.)
To assemble the dish, spread ½ cup of the sauce in the bottom of a 2-quart casserole dish.  Layer in half of the eggplant slices, overlapping the slices to fit.  Spread with another ½ cup of the sauce.  Sprinkle with half of the mozzarella.  Layer in the remaining eggplant and dot with the remaining sauce, leaving the majority of the eggplant exposed so it will remain crisp. Sprinkle with the Parmesan cheese and the remaining mozzarella.  Bake until bubbling and the cheese is browned, 13-15 minutes.  Cool 10 minutes, scatter the basil over the top, and serve.

Adapted from: The New Best Recipe (one of my favorite cookbooks)
Posted by Leigh at 5:05 PM 1 comment: 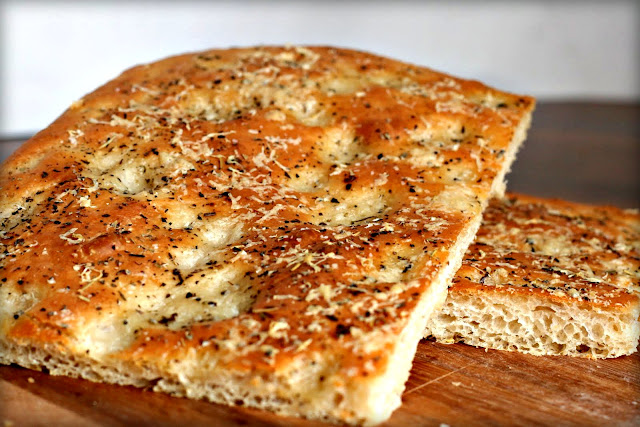 Mmm, focaccia.  It sounds kind of fancy and might even seem a little daunting to attempt at home.  But rest assured it's pretty simple if you have a little patience, because like all breads this takes a few hours from start to finish. Most of that time is spent waiting for it to rise though so go finish those projects around the house you have been putting off while it does it's thing.  It does require a little more fore thought than a regular loaf of bread since it begins with a starter you prepare the night before.  Definitely not a step you want to skip though since this will be when most of the flavor develops.  Focaccia is like a blank canvas.  Try it as written or go dream up your own toppings and add ins.  It's deliciously crunchy on the outside and chewy on the inside.  We had this with chicken gnocchi soup (recipe coming soon!) and it was the perfect accompaniment. 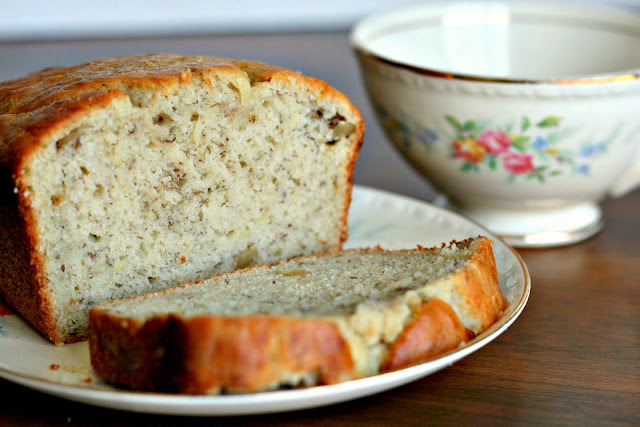 We go through bananas like mad in this house so it's a rare occasion when banana baked goods make an appearance around here.  Big D won't touch them but RiGuy will eat them anytime, in any state of ripeness.  RePeet will too, so long as it's one without a sticker.  Oh AND you remove the stem part, but not the peel before you hand it to him.  But other than that... he's not picky about his bananas (he really isn't picky when it comes to food, just, um, particular. yeah let's go with that).  In fact, I had to sneak a few from the bunch as soon as I brought them home and hide them so they could meet their banana bread destiny in peace. It was so worth the sneakiness.  We're talking best banana bread I ever made here.  Even the banana hater devoured at least a quarter of this loaf. I think the addition of cream cheese really sets this recipe above the rest in my book.  It gave it the perfect texture. And it's even better the next day, if it manages to last that long.  So the next time you hide have some over ripe bananas sitting around make this!

Bake at 350° for 45 minutes or until a long wooden pick inserted in center comes out clean and sides pull away from pan, shielding with aluminum foil last 15 minutes to prevent browning, if necessary. Cool bread in pan on wire racks 10 minutes. Remove from pan, and cool 30 minutes on wire racks before slicing.

Email ThisBlogThis!Share to TwitterShare to FacebookShare to Pinterest
Labels: banana 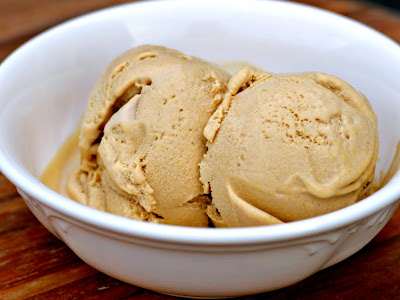 In honor of one of my favorite seasons, Pumpkin Spice Latte season, I thought I would post an ice cream recipe I created last week when I just couldn't wait one minute longer to have something pumpkin-y, spicy and latte-y.  It was about 300 degrees outside though so a hot cup of anything was not going to happen.  I just took my usual basic ice cream recipe, crossed it with David Lebovitz's pumpkin ice cream recipe and added a few spices.  It was heavenly and enough to tie me over until today when the drink finally hit the stores nationwide.

Mix together both sugars, cornstarch, cinnamon, ginger, cloves and salt in a small bowl.  In a large saucepan, combine heavy cream, whole milk and pumpkin puree over medium heat.  Add the sugar mixture to the saucepan and whisk together until smooth.  Continue to cook over medium heat until bubbly and thickened, about 10 minutes.  In another small bowl, whisk the egg yolk.  Slowly add about a half cup of hot cream mixture and whisk constantly.  Pour the now warm egg back into the saucepan and heat to 170 degrees.  Transfer ice cream base to another bowl and chill at least 4 hours, preferably overnight.  Freeze according to ice cream manufactures instructions.
Posted by Leigh at 3:04 PM No comments:

Leigh
Wife to the aviator and mom to three busy boys. I’m in love with everything involving the kitchen... ok, everything except cleaning it. I decided to start this blog as an easy way to share my favorite recipes.